The Military or College? Insight from a Veteran

Growing up, I never thought I could go to college. I was never very “book smart” and I was never a very good student. No one told me I could even go to college, in fact I was somewhat discouraged. For me, the military was not only a dream, but also my next logical course of action.

What you do after high school is a simple question, but with so many ways to answer, this simple question can feel completely overwhelming. Sometimes, it can lead to knee-jerk decisions which can change the course of your entire life.

There’s one option in particular I’d like to address: join the military or go to college?

For full disclosure's sake: I have been both a Sergeant in the United States Army and a college graduate. Using my own personal experiences, knowledge, and just some straightforward facts, I hope to help you make the best decision you can.

I Joined the Army After High School

Let me start by telling you a little about the military. Well, the Army. I can’t speak to the Marine Corps, Navy, or Airforce experience. I can say that my parents were both Marines and by the end of my service I outranked both of them. That makes for fun family reunions.

I could also proceed to tell you every single Marine and Air Force joke in the book, but I will let the inter-service rivalry subside for now. All in all, each branch of the military is very similar when it comes down to basic principles and mission.

Every service member swears the same oath and that oath sticks with you long after your time in service has come to an end. No matter if your choice is to be an Airman, Soldier, Sailor, or Marine you will become something different from who you are now. You will be a warrior, a sheepdog.

The real experience is not the same as movies and videogames.

Here’s what you can expect from the military: you start off as a worthless bag of bones sent to basic training to be the punching bag of some of the more clever, mischievous, and dedicated troops on the planet. Some branches call them Drill Instructors, others call them Drill Sergeants.

I call them role models and the keepers of military tradition. We’ve all seen the movies and the YouTube clips but I can tell you from personal experience it’s a whole lot different when you’re the one living it.

Their mission is to break you, and they will. They will tear you down then build you into something new. Something that is fit to wear their uniform and be part of a bigger team, or they’ll “wash you out” and send you home. You will get into the best shape of your life, you will push yourself to new heights, and you will be filled with pride and a feeling of accomplishment. You will also get to know exhaustion and pain on a physical, spiritual, and mental level.

Even after you graduate from Basic and Advanced Individual Training the experience doesn’t stop. If you go Active Duty (like I did) you’ll be shipped out to your new unit where the adventure continues. Prepare yourself for more because now your new Sergeant, Platoon Sergeant and officers will shape you into a productive member of their unit. The evolution of a soldier never stops, you’ll always be challenged to go further and faster. In addition to the constant challenges, physical training, and unit-sanctioned hazing you must always remember that as a member of the armed forces, you may be called on to serve in a war far from home.

I was. I spent fifteen months in western Iraq.

“It isn’t a videogame where you ‘hit x to respawn.’”

Always remember the basic function of US troops, no matter the branch of service, is to “close with and destroy the enemies of the United States in close combat.” (Part of the US Army “Soldier’s Creed.”) You will be trained to kill and there may come a time when you will have to take a life or have yours taken from you. For the record, it isn’t a videogame where you “hit X to respawn.”

If you’re looking to prove yourself somehow, win medals, or gain glory, I will tell you now you won’t. The warriors we veterans look up to, the ones who’ve gone before, weren’t in it for that foolishness. They were it for something greater. They simply rose to the challenge set before them and went above and beyond for that something greater.

All in all, the military is a great calling and vital for the preservation of our nation. You shouldn’t think of it as your last option. However, it is not for everyone.

How Do You Know If It’s For You?

When I decided to join the Army after high school, I weighed everything in the balance. I signed up in a time of war, knowing I would be sent into harm’s way. But becoming a soldier was my one goal, and I was determined to go.

It was all I ever wanted in life. I had a successful career and I would still be serving today if I could. Injuries from service overseas have kept me from continuing my career in the Army.

That’s just another reality of military life to consider. Serviceman and women suffer wounds of a physical, mental, and spiritual nature. Take everything into consideration and remember that personal experiences may vary. Talk to someone, or better yet talk to several people who know and have been there.

The military isn’t the place to figure out who are or what you want to be.

The bottom line is this: if you have any doubt in your mind, don’t sign up. If your heart and mind aren’t in 100% agreement to commit to the armed forces, look into other options.

The military isn’t the place to figure out who you are or what you want to be. If you’re not 110% committed to the oath and the mission of the US Military, don’t join.

Take the time to figure yourself out before you sign on the dotted line. There’s a common misconception that the military is where you go when you can’t find anything better to do. Or that the military is for people who can’t afford to go to college. That’s not the case, and there are many people out there who can help you figure that out.

“There’s a common misconception that the military is a last resort. It’s not.”

The military isn’t for everyone, and it’s ok if it’s not for you. The great thing about our all-volunteer armed forces is that everyone in it has a reason. Make sure you’re enlisting for the right one.

Education is the one investment we make in ourselves that cannot be taken away or destroyed. It’s how the professional world measures your ability to be successful. Military experience can help an individual attain employment, but there’s much more that can be said for those who have completed a college degree.

Regardless of my military experience and my abilities, I would not be where I am today without my college degree. Education opens doors, plain and simple. There’s a multitude of opportunity available for those who choose to go to college.

In the time it will take to complete one term of your enlistment in the military, you could complete a college degree and be on your way to a more lucrative and peaceful future. Education has many advantages, and I advise anyone torn between these two options to speak to a college admissions office, their guidance counselor, and a college advisor as well. That’s in addition to your local armed forces recruiter.

I must admit I was altogether ignorant of college while I was coming up in the world. My life in the Army didn’t bring me any closer to an accurate understanding of college life, either.

I always thought college “kids” were lazy and unmotivated. Like I said, I was ignorant.

When I left the Army, I immediately put my GI Bill college benefits to work and started my associate degree at Ivy Tech Community College in Indiana.

“College students didn’t have it as easy as I had thought.”

I soon learned that college students didn’t have it as easy as I had thought. I was challenged and my mind was worked harder than ever. I had to learn a new set of skills quickly; after all, I hadn’t been a student for about five years. Eventually I became proficient at being a student and eventually began to really enjoy it!

I ended up graduating with my Bachelor’s degree from Ball State University and I have to say, I was as proud of that accomplishment as I had been graduating from Army training. My family was too. Now I am making plans to complete a Master’s degree in the near future.

Read: Why Community College is Not Like High School

I’ve been through both, so trust me when I say: the college experience is VERY different from the military. It takes a tremendous amount of personal accountability to remain on track in your education. It’s easy to be distracted, fall behind, and procrastinate--unlike the military.

In the military you will be held accountable for everything, someone will always be telling you what to do, how to do it, where to do it, and when to do it. In college, you sink or swim on your own merits.

You will be just as challenged in college as in the military, just in different ways. The great thing about college is that for every challenge you will face there is a support system in place. If you need tutoring in a subject, it’s available. If you suck at writing papers, no problem: there are study groups and writing centers just for you.

Student success is the name of the game in college, and you will be surrounded by individuals devoted to seeing you succeed.

Ultimately, you’ll have to answer that for yourself.

If you know in the very core of your being that that is that military service is the path for you, then do it and know that I, and all veterans wish you godspeed in your journey.

If after you’ve weighed your options, done your research, and talked to recruiters and admissions officers, and you still can’t say that you’re 110% committed and comfortable with military service, then walk away. Go to college or even take a gap year instead. 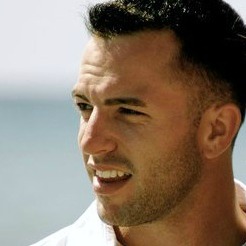 Tom is a Regional Admissions Counselor for American Honors. He writes about how students can make smart choices after high school.